Can Dogs Have Thyroid Problems?

Proper thyroid gland function is essential for the overall health of your dog's body, however, hypothyroidism is a common thyroid issue for dogs. Dogs with hypothyroidism have metabolic rates below normal, and as a result are prone to lethargy and weight gain. Hypothyroidism can cause a wide variety of symptoms in affected dogs, including intolerance to cold, a slow heart rate, irregular or absent heat cycles, chronic ear infections and eye problems, constipation, and anemia. There may be darkening of the skin and symmetrical hair loss down the flanks. The coat and skin may be dry and brittle or oily, as well as having hair that falls out more easily than other pets. Behavioral changes, including aggression may be seen in some dogs with hypothyroidism.

Causes of thyroid problems in dogs

In most cases, hypothyroidism is caused by autoimmune thyroiditis, which results in the destruction of the thyroid tissue. This is believed to be an inherited disease. A less common cause of hypothyroidism is when the thyroid gland atrophies (wastes away) for unknown reasons. Environmental and dietary factors are also believed to be involved, including polyvalent (multiple) vaccinations, and/or rabies vaccination, which may lead to hypothyroidism in some susceptible dogs. Hypothyroidism mostly occurs in middle-aged medium and large breed dogs, but the disease may be documented in many breeds. Some common breeds affected include the Miniature Schnauzer, Dachshund, Shetland Sheepdog, Cocker Spaniel, Golden Retriever, Labrador Retriever, Greyhound, and Doberman Pinscher to name a few.

An underactive thyroid means that there is a subnormal level of thyroid hormones produced from the glands, which results in the clinical signs described above. The two main hormones produced by the thyroid are thyroxine (T4) and triodothyronine (T3), both of which control the rate of metabolism. While both of these hormones may be measured when screening dogs for hypothyroidism, it is usually essential to measure other hormones such as a Free T4, TSH, and thyroglobulin auto-antibodies to properly diagnose this disease. When a dog is diagnosed with hypothyroidism, the most common form of treatment is by supplementing with T4, which most commonly comes in the form of Levothyroxine. Dogs are usually started on twice daily treatment, and will typically have thyroid levels re-checked four to six weeks after starting medication, and then once to twice a year as needed. Only in rare cases is T3 supplementation needed in dogs. For holistically oriented dog owners, a more natural form of thyroid supplementation known as armour thyroid may also be tried, in addition to thyroid glandulars available from certain nutritional supplement companies.

Prevention of hypothyroidism in dogs

There is no proven preventable measure for hypothyroidism in dogs, but avoiding exposure to unnecessary vaccination, as well as avoiding overuse of pesticides is recommended. Since iodine and selenium deficiency may be involved in some cases of hypothyroidism, it is recommended that dog owners consider adding a digestive tract enzyme to meals in order to help dogs with nutrient and mineral absorption.

Environmental factors like soil iodine levels and exposure to toxins and pesticides are suspected in playing potential roles in thyroid adenocarcinoma (cancer) development in dogs, but the cause of thyroid cancer is still unknown in most cases. Symptoms of thyroid cancer may include a movable mass over your dog's trachea covering the larynx, difficulty breathing and swallowing, weight loss, hoarse barking, as well as increased thirst and urination. This type of cancer is rare, but when found it can be quite aggressive with the potential to spread to other tissues and organs, such as the lungs. Treatment options will include surgical removal of the thyroid mass, as well as possibly chemotherapy and/or radiation if spread is suspected or confirmed.

Pets with thyroid issues are often recommended to take digestive tract enzymes which helps with mineral and nutrient absorption. 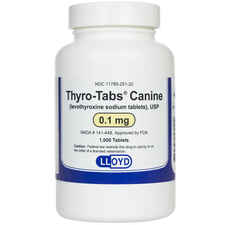