What Causes Lyme Disease in Dogs and Cats?

Lyme disease is caused by the microorganismn spirochete Borrelia burgdorferi. There are different ticks in different regions that are carriers of the disease. The tick that commonly transmits Lyme disease in the East and Midwest is Ixodes scapularis; in the West, it's Ixodes pacificus.

What is Lyme disease?

Key facts about Lyme disease in dogs and cats

Which pets are most at risk for Lyme disease?

How does Lyme disease affect people?
Lyme disease is a more serious problem for people than for pets. In pets the biggest problems are with the joints, and possibly with the kidney filtering unit, the glomerulus.

Where should I look for ticks on my pet?
Most often, you can find ticks around the head and neck of your pet. Ticks also like to hide between the toes, on or in the ears, around the ridges of the ears, in the armpit, and groin. Ticks can be very small so when you check your pet, look carefully. Sometimes what looks like a freckle on your pet can be a tick.

How do I remove ticks from my pet?
Using tweezers, grab the tick as near to your pet's skin as you can, and gently pull it straight out. Be careful not to squeeze the tick too hard when removing it because bacteria could be injected into your pet's skin. Alternatives to using tweezers include products such as the TickSee Removal Kit.

DO NOT try to remove the tick with your fingers or try to remove it with lighted cigarettes, matches, nail polish, or vaseline. If you are having a hard time, please contact your veterinarian for help. 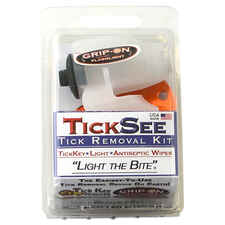