What Causes Glaucoma in Dogs & Cats?

Glaucoma in dogs and cats is increased pressure in the eye. The eye is approximately round, like an egg, but rather than having a hard shell like an egg, the eye has a soft flexible outer covering. The flexible eye would collapse except that it is kept expanded by fluid. The fluid is made within the eye at a steady rate and flows out of the eye through a canal at a steady rate. If too much intraocular fluid is made, or if the fluid cannot flow out through the canal, the pressure builds within the eye causing glaucoma.
Pets are twice as likely to develop secondary glaucoma—have another health problem that causes the pressure within the eye to increase—than to develop primary glaucoma.

Primary glaucoma in pets
Primary glaucoma is caused by a problem either with fluid flow within the eye or with flow out through the eye canal. Most pets with primary glaucoma have too narrow an angle for the fluid to flow easily out of the eye. With primary human glaucoma, the opposite occurs: the outflow angle is wide.

Secondary glaucoma in pets
Secondary glaucoma is caused by a disease that affects the eye so that the eye responds by making too much fluid or by developing a problem with fluid outflow. For example, if your pet has a systemic fungal infection (toxoplasmosis, histoplasmosis, blastomycosis or cryptococcosis) the infection affects the eye, causing glaucoma. If your pet was hit by a car and the lens within the eye was shaken loose, the lens can block fluid flow and create glaucoma. With secondary glaucoma, it is as important to treat the underlying cause as it is to treat the glaucoma itself.

Key facts about glaucoma in dogs and cats

How eyeball pressure relates to glaucoma in dogs
Normal pressure for dogs is approximately 25 mmHg. Normal pressure for cats is approximately 30 mmHg.
Eyeball pressure is low compared with blood pressure. For example, the circulating blood always has a pressure about 80 mm Hg; and in dogs and cats, the blood pressure rises to 140 or 170 mmHg when the heart contracts.
Pet eyeball pressure is measured with a tonometer, just as it is measured for humans.
Glaucoma in pets is bad because it leads to blindness. About 40% of dogs with glaucoma will be blind within a year regardless of glaucoma treatment. Although glaucoma can begin in one eye, 50% of pets with glaucoma develop the disease in the other eye unless they receive glaucoma treatment.

When using a product such as Timolol, do not touch the dropper to any surface, including eyes and hands. The dropper is sterile. If it becomes contaminated, it could cause an infection of the eye. 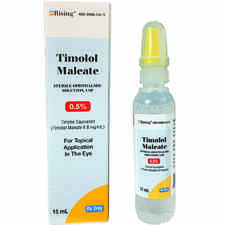 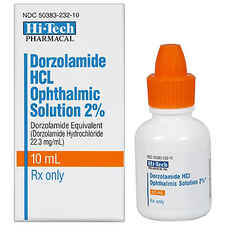 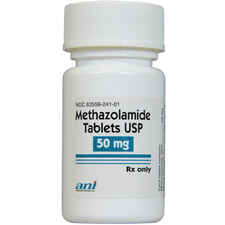