What is EPM in Horses? 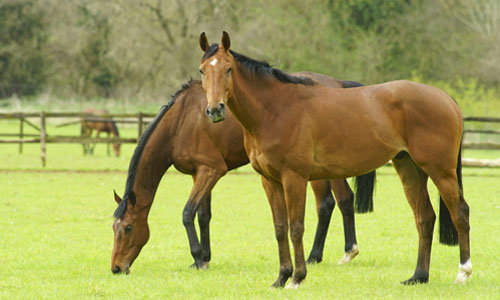 Caught early, your horse can completely recover from EPM. In severe cases, though, it can ultimately end your horse's life.

Any horse can contract EPM, so it's crucial that all horse owners know about this disease, and how to recognize early symptoms to ensure the best chance of recovery.

What Causes EPM In Horses?

EPM is colloquially known as "possum disease" because horses typically get it from exposure to food or water sources that have been contaminated with possum feces infested with a single-celled parasite called Sarcocystis neurona. Less commonly, the disease is caused by the parasite Neospora. hughesi.

It's estimated that 50 percent of horses are exposed to Sarcocystis neurona. Most horses simply develop immunity to the parasite after exposure, never suffering the effects of EPM.

In just one percent of horses exposed to the parasite, the infection crosses the digestive system into the bloodstream, where it eventually reaches the central nervous system. The infection causes damage to the brain, spinal cord and peripheral nerves.

Some horses develop symptoms immediately after exposure. In others, symptoms may not appear for months, often in times of stress.

It's unclear why an unlucky minority of horses develop EPM after exposure to S. neurona. The disease has been reported in horses from 2 months to 24 years of age, but usually affects those between 1 and 6 years old.

EPM is most commonly found in Thoroughbreds, Standardbreds and Quarter horses. It's also been found in ponies, but it has not been found in mules, donkeys or other non-horse equids.

Thankfully, a horse affected by EPM cannot pass the disease to other horses or to humans.

What Are The Symptoms of EPM In Horses?

That's why it's important to have your horse examined by a veterinarian at the presence of even mild symptoms such as lameness, head tilt, paralysis, stiffness, leaning to one side, lack of coordination or weakness. Symptoms can develop suddenly or progress gradually. All cases are different - no two affected horses will have identical symptoms.

As the disease progresses, your horse may start to have seizures, weight loss, and difficulty swallowing. If left untreated, EPM leads to death.

If caught in the early stages of the disease, horses with mild symptoms typically make a complete recovery. In severe cases, symptoms can improve, but permanent neurological damage is likely.

Testing For EPM In Horses

EPM is tough to diagnose. First, your veterinarian will need to rule out other causes of your horse's neurological symptoms. Then, they'll need to collect a blood sample and a spinal fluid sample to conduct tests.

The traditional Western Blot Test is commonly used to diagnose horses with EPM. Your horse's cerebrospinal fluid is checked for the presence of antibodies that suggest your horse's immune system is fighting the disease. The Western Blot test identifies EPM cases caused by S. neurona, but will offer a false negative if the disease is caused by N. hughesi.

The indirect fluorescent antibody test (IFAT) is a newer EPM test. With the help of a microscope, it shows the presence of S. neurona or N. hughesi, along with their concentration, and also reveals if the infection is active.

Another diagnostic method is the Enzyme-Linked Immunosorbent Assay (ELISA) test, which generates titers, or shows the concentration of antibodies that indicate that your horse has an active infection.

All of these tests have subjective results, meaning that they can suggest that your horse has EPM, but it is currently impossible to tell if your horse truly has it until they respond to treatment. If your horse does not get better, further testing may be needed to determine the underlying cause of their symptoms.

Treatments for EPM is typically expensive, and can take anywhere from 28 to 120 days.

Your veterinarian can prescribe antiprotozoal drugs: a combination of pyrimethamine and sulfadiazine such as Rebalance, or either ponazuril or diclazuril. These drugs weaken the parasites so your horse's immune system has a chance to fight the disease.

In conjunction with antiprotozoal medication, the American Association of Equine Practitioners (AAEP) recommends supplementing natural-source vitamin E at 10,000 IU/day to strengthen the immune system and help your horse recover from existing neurological damage.

Your veterinarian may also prescribe other medications like an anti-inflammatory to help relieve symptoms while your horse recovers.

While your horse is being treated, you'll need to limit physical activity and stress.

About 10 percent of affected horses will suffer a relapse, especially in horses with severe cases. Relapse can be triggered by stressful events such as travel. Talk to your veterinarian about when your horse can safely resume their usual activities.

The best way to prevent exposure to the parasites that cause EPM is to keep your horse's quarters clean. Food and water sources should be cleaned regularly and covered to prevent contamination by wild pests.

Possums are the most notorious carrier of the single-celled parasites that cause EPM. They're also notorious scavengers. Make sure to remove any food sources, like uneaten pet food, around your property.

Possums usually pick up EPM-causing parasites by eating the dead bodies of other wild animals, so you should be on the lookout for any creatures that can contaminate your horse's quarters, and pick up any dead bodies of wild animals that you find.

Exposure to parasites may be inevitable, especially if you live in an area with a high population of wild creatures. However, you can prevent your horse from developing the disease, even if exposed, by reducing sources of stress that can trigger symptoms.

Lastly, see your equine veterinarian regularly, and inform them if your horse has any symptoms that could be linked to EPM. Early diagnosis and treatment are key to your horse's survival and recovery.