We’re sorry, but our website doesn’t work properly without JavaScript enabled. Please enable JavaScript in order to continue using our website.
How to Treat Yeast (Fungal) Infections in Pets | PetMeds®
Navigation ×
Contact Us My Account Quick Reorder Cart Already a customer? Sign In

How to Treat Yeast (Fungal) Infections in Pets

Yeast dermatitis is a fairly common inflammatory skin condition in pets. The condition is caused by overgrowth of the Malassezia species of yeast, which are normal inhabitants of the skin, ears, and mucocutaneous areas. Yeast infections are particularly common in hot, humid environments. The infections occur when the yeast reproduces uncontrollably, overpopulating and invading the areas where it normally resides. Usually this will occur when your pet's immune system becomes compromised and/or strong immunosuppressive drugs are being used. There are other yeast-like organisms or fungi that may invade into the blood and circulation and cause problems in the lungs, liver, spleen, bones, eyes, brain, and other organs. Examples of these other more serious fungi include aspergillosis, blastomycosis, cryptococcus, histoplasmosis, and Valley Fever. These other fungi are found in various areas across the country where soil conditions favor the development of fungal spores amenable to infection in many cases.

Causes & symptoms of yeast infections in pets
Malassezia is a normal inhabitant of your dog's or cat's skin, but it becomes problematic only when it changes from a harmless to a pathogenic form. The precise causes of this transformation is unknown, although factors that suppress or imbalance the immune system are often involved. Some factors that may contribute to yeast infections include allergies to fleas, inhalant/contact allergies, food allergies, prolonged use of steroids or antibiotics, hormonal disorders like hypothyroidism or Cushing's Disease, cancer, chemotherapeutic drugs, and external skin parasites. Pets with excessive skin folds such as the brachycephalic breeds of dogs (Bulldogs, Pugs) are also at increased risk.
Concurrent bacterial skin infection also may cause an increased risk for yeast overgrowth. Yeast overgrowth will often result in increased oil production by the skin, causing increased itching that can create secondary sores, and providing an even more supportive environment for the yeast to thrive.
Symptoms of yeast infection may include intense itchiness, skin irritation, and inflammation, especially around the ears, between the paw pads and digits, and on the nasal folds, anal area, armpits, and neck. Skin redness, sores, and sticky discharge are often secondary to yeast overgrowth. Greasy coat and/or hair loss is also frequently seen, as well as foul-smelling, rancid skin. When occuring in the ears, yeast infections may lead to yellowish green, musty smelling discharge. Some breeds of dogs predisposed to yeast include West Highland White Terriers, Poodles, Basset Hounds, Cocker Spaniels, and German Shepherds.

Remedies for skin and ear yeast infections in pets
Zymox Otic Enzymatic Solution with Hydrocortisone is recommended for yeast of the ears, which often results in dramatic response of clinical symptoms. This product works through the action of antifungal enzymes that literally break up wax and discharge from the ears. For pets with yeast infection on the skin, some excellent products include Be Soothed Tea Tree Oil Skin Relief topical spray (for dogs), Be Super Clean Shampoo, and Medicated Shampoo. The spray works through natural tea tree oil, while the shampoos work with the use of antifungal medicines. In severe cases of yeast overgrowth, oral Ketaconazole or Fluconazole is recommended to help alleviate the infection.

Yeast infections of your pet's internal organs
Symptoms of internal fungal infections of the lungs and other organs are quite varied. With respiratory involvement, lethargy, fever, coughing, and difficulty breathing, as well as purulent and/or bloody nasal discharge may be seen. Vomiting and loss of appetite also may be seen. Other symptoms vary depending on the organs involved and may include visual symptoms like corneal ulcers and blindness, as well as lameness and neurological symptoms like seizures. Diagnosis can be difficult and may involve X-rays and blood testing. Systemic antifungal medications are often needed for these infections, including Ketoconazole, Itraconazole, or Fluconazole.

Make sure you complete Ketoconazole or Fluconazole unless directed by your veterinarian. The entire treatment plan should be completed to prevent relapse or resistance. 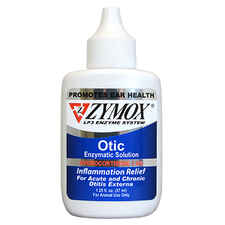 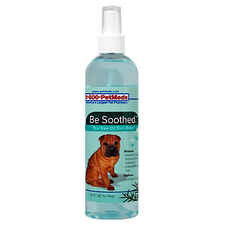 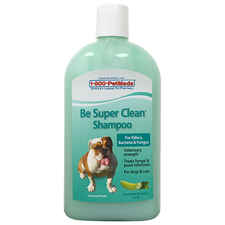 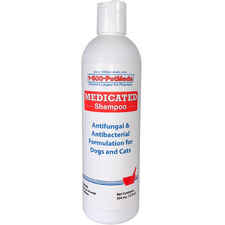 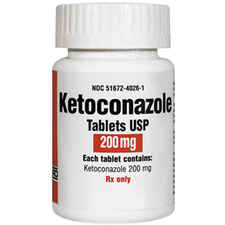 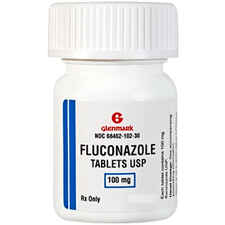