We’re sorry, but our website doesn’t work properly without JavaScript enabled. Please enable JavaScript in order to continue using our website.
Ask the Vet About Weight Loss in Dogs and Cats | PetMeds®
Navigation ×
Contact Us My Account Quick Reorder Cart Already a customer? Sign In

Ask the Vet About Weight Loss in Dogs and Cats 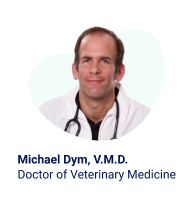 How can I get my 8 month old kitten to eat? He suddenly stopped and I’m lucky if I can get him to eat treats.

This is rare for a growing kitten, but also very nonspecific, so I would recommend having your veterinarian check him out and run some tests if it continues, especially if he is visibly losing weight.

Hi, my dog is on the older side. She goes through phases of not really eating. She’s in the cycle now and she’s losing weight. I bought her some protein powder for dogs to mix with her food to see if she’ll eat it. I was just curious in the long run is there anything I can do to put the weight back on her? She’ll eat human food but is picky and will skip eating dog food.

I am trying to help my dogs gain weight in a healthy way. Please help

I would need to know a LOT more about your dog to really help you (how old, has s/he been dewormed properly, actively level, what does s/he eat now, how much, etc etc.) so consult your veterinarian for the best advice.

How can I get my ferret to gain weight and grow her hair back?

I am solely a small animal (just dogs and cats) veterinarian so contact a veterinarian that specializes in exotics for help with your ferret. You can often find them at your local veterinary school or on websites like Justanswer.com.

My 4 yr old male cat is very overweight. He can't even clean himself properly after using the litter box. What dry food should I switch to?

The diet I have the most success with is Purina Proplan OM. Here is a direct link to it: https://www.proplanvetdirect.com/feline-dry-om-overweight-management

Just want to check, should I have dog checked to rule out something (thyroid?? etc) for an obese Pomeranian in my care? She does love to OVEREAT. Shr is now on a healthy weight-loss diet, but I l like being extra careful.

If it is hard for her to lose weight on the diet, yes, have her thyroid checked.

I worry about many things with a bloated, inappetant kitten : everything from intestinal parasites, which are easy to treat to things like feline infectious peritonitis which is not, then lots in between, so see your veterinarian if it continues or worsens.

At 5 mo., my cat stopped eating and drinking, became very lethargic, his coat looked constantly ungroomed, and began breathing with difficulty. He was like this for the entire 2-4 days it took for the vet to see him and sometime during the second or third day of him not eating or drinking, I began syringe feeding him mashed up hot-dogs with chicken broth and water, as well as giving him plain syringes of water. At the vet's, I was told he had pneumonia. He was given some medication (an IV for dehydration, antibiotics that would last 10 days, and a pill of which I can't remember the purpose). He began eating and drinking the day after he saw the vet, although I was syringe feeding him and giving him water until then. He has been given antibiotics twice now, has had multiple rounds of liquid roundworm dewormer and a tapeworm deworming pill just in case, and he still won't put back on the weight he lost and he still breaths with difficulty. It's been four months now that his breath has been labored, his coat still doesn't look completely healthy, and he remains scarily thin. He eats well, plays well, sleeps well, has regular BMs, has no potbelly, has no discernible lumps, grooms his coat, etc.. He acts like nothing is wrong and his body appears fine from the outside except that he is practically emaciated, his coat doesn't look all that healthy despite him grooming it, and his breathing is still just as bad as it was when he had pneumonia.

I would really need access to all of his medical records to really help you: has he been tested for FEVL & FIV, has he had multiple fecal samples analyzed, what does his cbc/profile look like, what do x-rays of his chest look like, etc etc. so consult your veterinarian, who has access to all of that information, for the best advice. If all of the above and other tests have been normal, you can ask for a referral to a specialist.

Our 14 year old female Irish Setter stopped eating about a week ago. A few weeks ago she had a bladder infection and was put on medicine and she appeared to be ok. Our vet did blood work and said everything looks ok and he cannot explain why she is not eating. He now wants to send us to a specialist to do more invasive examinations. Does not make sense to me why she will not eat but there is not reason for this. Got any suggestions?

Just not eating is a VERY nonspecific clinical sign but usually means something is going on, so yes, more tests are probably ideal.

has small hard poops. She eats her dry snackies whole and likely the dry food.

I would need to see her to determine how overweight she is at 15 pounds - depends on her frame. There are many lower calorie foods available. The prescription diets will work better but are more expensive. BUT, overall, there is no secret to weight loss (with them or with us) - weight loss occurs when you reduce the calories and increase the exercise, even if you work with the food you are feeding, but you usually need to dramatically reduce the amount to get weight loss because cutting it just a little will be a maintenance amount and will allow them to maintain their current weight.

Hello, Me and my wife adopted a cat recently after having had a painful loss not long ago. Our kitten is loving and delightful but has been constantly losing weight. Our vet suggested and is going to test her for feline infectious peritonitis. If that is the case what can we do ? We are in horrible emotional pain, self blame etc. What can we do?

There are MANY causes of weight loss, so don't worry too much until you have a diagnosis. Here is a link to our article about the various causes of weight loss: https://www.1800petmeds.com/education/causes-weight-loss-dog-cat-37.html Then here is a good article about FIP, written by another veterinarian from a site that I trust: https://veterinarypartner.vin.com/default.aspx?pid=19239&id=4951549

i beleive it has to do with the change of her flea and tick treatment . which i changed 4 months ago

Many things can cause those clinical signs (kidney disease, liver disease, toxins, cancer, severe parasite infestation, etc.) - they are all treated very differently so have your veterinarian check her out so you can make a plan for her.

I have a female dog mixed a family member gave her to us. She eating health through out her whole life but now I see that she getting skinny and her ribs is showing. She was a chunky dog and now she is skinny what should I do. They are some foods that she likes and some of the food she doesn't like. She eats wet dog food. Sometimes she will eat the dry food but I have to put wet food inside the dry food so she can eat. The last thing she been trying to eat dirt and rocks and I dont know why.

There are MANY causes of weight loss in a dog - everything from intestinal parasites to cancer and about a million in between. Intestinal parasites are easy to treat, but you need to know which one(s) she has - there are many - if you start just guessing, use a broad spectrum dewormer that covers whip worms, like Panacur - there is a link to Panacur in this link about causes of weight loss and potential treatments, both over-the-counter and prescription: https://www.1800petmeds.com/education/causes-weight-loss-dog-cat-37.htm

My male Yorkie is overweight and it is causing medical issues on joints and energy etc He does not want to move much. Acts depressed. How many calories should my medium size Yorkie consume. He weighs 23 pounds. I find conflicting info. Please Help,I feel so guilty for him getting so big. It doesn’t seem like we feed him that much. He has had blood work to check for medical conditions.???

There is no set amount of food because all dogs ahev their own metabolism. Cut whatever you are feeding him in half. Be sure your veterinarian has specifically checked his thyroid. There are many lower calorie foods (with and without beef) available. The prescription diets will work better but are more expensive. BUT, overall, there is no secret to weight loss (with them or with us) - weight loss occurs when you reduce the calories and increases the exercise, even if you work with the food you are feeding, but you usually need to dramatically reduce the amount to get weight loss because cutting it just a little will be a maintenance amount and will allow them to maintain their current weight. Dogs usually enjoy the second part of the weight loss equation = exercise - even if it's just daily walks.

015
DateSep 1, 2020
CategoryUnexplained or Unhealthy Weight
Pet Typenull
TopicEats but not gaining weight. Has never been a big cat always skinny. No urinary or GI symptoms

I really need to know a LOT more about your cat, do a physical on him/her and run some bloodwork, so see your veterinarian if it continues or worsens. If your cat is over 10 years of age, you are kind of describing hyperthyroidism, so that is one (of many) possibilities - it is easy to diagnose and usually pretty easy to treat.